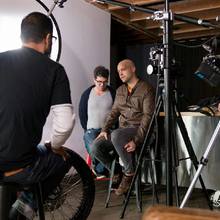 Vocon - "Inside Out"
Vocon is an architectural firm based out of Cleveland, dedicated to making functional spaces