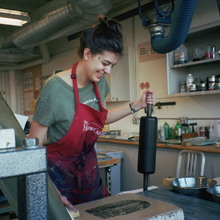 Julia Milbrandt is a visual artist and printmaker from Buffalo, New York currently working and living in Cleveland, Ohio. She is a recent graduate from the Cleveland Institute of Art with a BFA in Drawing and Printmaking. Her work has been shown regionally at various locations including, the Progressive Corporation, The Cleveland Institute of Art and the Morgan Conservatory in Cleveland (OH), the Columbus Cultural Arts Center in Columbus (OH), Flower City Arts Center in Rochester (NY), and the Western New York Book Arts Center in Buffalo (NY). Julia served as a committee head for CIA’s Student Independent Exhibition where she and her fellow committee members organized a juried exhibition of student work in the Reinberger Gallery; from beginning to end, inviting and hosting professional artists as jurors, to marketing and planning the exhibition itself. Julia was also a recipient of a grant from the Cleveland Foundation as a part of the Creativity Works program at CIA, which she used to put together her first solo exhibition, Technicolor Perspective, at the Gordon Square Arts District office at 78th Street Studios. She has also interned at the Morgan Conservatory in Cleveland, and the Western New York Book Arts Center in Buffalo.

Milbrandt's work consists of works on paper that often teeter between abstraction and representation. Full of bright color, and intricate detail, her drawings and prints document brilliant visual experiences of the everyday, ones in which light and color momentarily abstract the world around us and alter our perception.