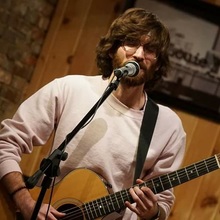 Joseph Maxwell is a songwriter based in Northeast Ohio. He plays lyric-driven acoustic folk, taking influence from indie and emo music. He has been writing songs since he was 8 years old (but those ones were terrible). Now, his songs are emotional and earnest, spanning subjects like growing up, being sad, and grappling with the incomprehensibility of the universe. One very kind YouTube commenter said he has "a gift for conveying deep emotions through performance." His dad has described him as "a gem of incalculable beauty," which he appreciates but also thinks might be a bit of an overstatement. In his writing, he attempts to emulate artists like Saintseneca, Paul Baribeau, Julien Baker, and Death Cab for Cutie. He has performed at venues all around the Cleveland area, and has visited the comedy shows "Mental Illness and Friends" and "This Improvised Life" as a musical guest. He currently lives in Lakewood with his lovely girlfriend Ali, and she has a cat, which means he also has a cat.