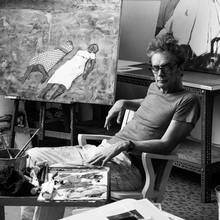 John often combines traditional oils with alkalids, charcoal and graphite. Working mostly on large canvases, he freely applies his medium without sacrificing subtle emotional details. This method allows him to control the negative space, which is vital to the ambiguity that runs through all of the work. What appears to be a gentle gesture to some can appear violent or passionate to others.

John has been accepted into numerous juried shows including the prestigious Butler Midyear Show at The Butler Museum of American Art and recently juried into The Ohio Arts Council Riffe Gallery First Juried Show in Columbus OH. In July of 2015 he was the first non-photographer to show paintings in The Cleveland Print Room. A gallery dedicated to the photographic arts He was nominated for the Cleveland Arts Prize in 2009 and in 2004 his charcoal drawing “Viewpoint” was purchased by the Erie Art Museum and entered into their permanent collection. John's work, "Visitation" was purchased and entered into The Massillon Museum's permanent collection in 2017. His work can be found in collections across the United States and in Europe.

John also has a passion for education.He teaches classes at several arts organizations, such as BAYarts, Orange Art Center and Valley Arts Center and The Boys and Girls Club of Cleveland as well as giving workshops and private instruction primarily in figure drawing and painting. He is also dedicated to mentoring visiting international artists in Cleveland as part of the Cleveland Foundation’s Creative Fusion Initiative.