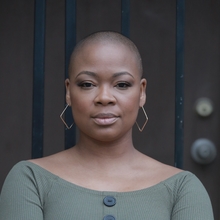 Donnie Lynee is a Soul, R&B and
Gospel singer/songwriter hailing
from Cleveland, OH. Donnie first
showed a strong inclination for
singing and instrumentation by the
age of two. As time passed, Donnie’s
passion for music continued to grow,
which led to admittance at the
Cleveland School of Arts where she
studied classical violin, vocal music,
and jazz art. Naturally, her innate
proclivity for words and melody led
her to explore writing and recording
original music with the S.T.A.R.S.
Program located in Columbus, OH.
In 2015 Donnie released her début
EP “Future In Retrospect”, which
received raving reviews from both
national and international music
bloggers and DJ’s. Since then she’s
released two singles, several music
videos along with a second EP titled:
“Live Now”, which was released in
January 2018. The sultry songstress
has performed at world famous
venues such as the House of Blues,
Karamu House, Cleveland Public
Theater and has even been seen
performing on Fox 8 News,
Donnie’s soulful vocals are
consistently coupled with exquisite
production, which have garnered
her national attention from notable
colleagues and music executives
alike. Her current projects
demonstrate her aptitude to
communicate love, loss, and hope
through introspection and personal
stories of survival and triumph.