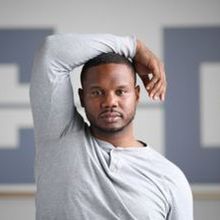 Dominic (2019 Cleveland Arts Prize Recipient), now in his 10th season with Inlet Dance Theatre, hails from Akron, OH, where he attended the University of Akron and Firestone High School (Akron School for the Arts). Recently recognized as “New Agent” by MOCA Cleveland, Dominic has received numerous fellowships and recognitions as an emerging artist and arts leader including: 2019 Jacob’s Pillow Ann & Weston Hicks Choreography Fellow, 2018 Commission by Akron Art Museum to his solo work, “CAUTION”, a 2018 Breakout Artist by the Devil Strip Magazine (Akron), 2016 National Arts Strategies (NAS) Creative Community Fellow (DC), 2016 Collen Porter Fellow (International Performing Arts for Youth), and an inaugural member of Leadership Akron’s Diversity on Board Program. Recently, Dominic has completed a certificate program with National Arts Strategies Executive Program in Arts & Culture Strategies (University of Pennsylvania) to enhance his capacity in all aspects of running a thriving arts & non-profit culture organization. Moore-Dunson currently serves of the board of ArtsNow and the Akron Cultural Plan Steering Committee.

Dominic began his relationship with Inlet as a Trainee in the Inlet Trainee & Apprentice Program and quickly grew to Apprentice status. A year later, he became a Company Member. In 2014, Dominic was promoted once again to become Inlet’s Rehearsal Coordinator and was selected to be the Company Representative on Inlet’s Strategic Plan Steering Committee. This season, Dominic was appointed to be the Company Dancer representative of the Capital Campaign’s Project Leadership Team. Dominic is currently being mentored as an emerging choreographer. Under the direction of Bill Wade, Dominic has established a large-scale community-based dance theatre project called “The ‘Black Card’ Project” that premiered in Sept 2018. “The ‘Black Card’ Project” is a live-action dance-theatre cartoon that examines the narrow definition of blackness and the African-American ideal of the “Black Card”. Dominic is entering Phase 2 of this project which will use the show as a catalyst for economic development/diversity for “The Black American Family”; partnering with arts, education, and business institutions/corporations to create conversation around black identity, how it relates to economic development in the black community and the solutions we can generate to cultivate a more diverse pool of black professionals.

Since joining Inlet Dance Theatre, Dominic is involved in the collaborative creative process Inlet is known for, been a lead instructor in numerous Outflow residency programs for children, and he has performed/and or taught all over the country (Cleveland, Houston, Seattle, Philadelphia, Cincinnati, East Lansing, Des Moines, etc..), including Jacob’s Pillow’s Inside/Out series in August of 2017. Dominic feels strongly about designing, creating, and executing human-centered artwork and programming through his practice. His long-term goal is “to become a world-class artist and arts leader who understands the needs of the people. And to position myself as a beacon who can lead our communities into a time of hope, humility, trust, and radical reconciliation”.

As the Assistant to the Artistic Director, a Company Member, and an emerging choreographer with Inlet Dance Theatre, my dance-making involves facilitating collaborative creative sessions with other artists and members of the community. I create work with, for, by and about the people I’m collaborating with. The process I utilize is a transformative catalyst for both the community and myself. Together, we explore issues of contemporary life, often providing a hope infused voice through the significant form of dance for those who are otherwise unheard.

As an African-American male from Akron (OH), my choreography is often narrative-driven with an “Urban Midwest Storytelling” style. The work includes topics of identity, such as a “coming of age” journey that mirrors the autobiographical narrative of the community or my personal life, often wrestling with the nuances of underrepresented people in the context of current-day issues. I ask questions, give a platform to the voices of community members involved in the creative process, and create a visual exploration in response to current culture.

In addition to being groomed as a choreographer by Bill Wade (Founder Executive/Artistic Director of Inlet Dance Theatre), I am blessed to have worked with many famous choreographers of color, including Helanius Wilkins, Michael Medcalf, Ronald K. Brown, and Garth Fagan. I honorably accept the responsibility of carrying the triumphs and burdens of past generations of black choreographers as our nation continues down the path of our current social and political climate. I see my work as a tool for “radical reconciliation”, a concept which challenges opposing people groups in America (black/white, man/woman, democratic/republican, etc.) to recognize, accept, and transform internal or external oppressive viewpoints and come together to reconcile often traumatic relationships utilizing the learned tools of humility and forgiveness.