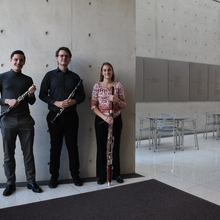 Tiberiu Baicoianu is currently pursuing his master’s degree as a student of Franklin Cohen at the Cleveland Institute of Music. He performs with the newly formed and fast-expanding Cleveland Wind Trio, which has been giving fresh, compelling performances throughout Cleveland. For the 2018-2019 season, he joined the North Coast Winds, an award-winning wind quintet known for their exciting performances and community outreach. He is the current clarinet faculty at the Oberlin Community Music School and at the Gilmour Academy through Cleveland International Piano Competition ArtsConnect. He appears on multiple Oberlin Conservatory Label Recordings such as the Bernard Rands English Horn Concerto and Stephen Hartke’s declamatory “State of Ship”, as well as on the Naxos label in a 2018 GRAMMY-nominated album featuring contemporary American music as part of the National Orchestral Institute and Festival. He has performed alongside the Cleveland Orchestra as part of the Kent/Blossom Music Festival. His love for chamber music has brought him to countless audiences at places such as the Alexandria Lyceum, the Kennedy Center’s Millennium Stage, the National Art Gallery, Kent State University, University of Maryland, Oberlin, Tanglewood, Brevard and countless others. Likewise, his love for orchestral music has brought him before even broader audiences. His former teachers include Richard Hawkins and Claire Eichhorn.