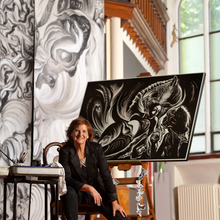 Cathie Bleck is an artist and illustrator with an affinity for detail using inks, clay and sharp fine tools creating carved narrative artworks. Bleck shifted her career path as an esteemed illustrator for over 30 years to focus on her personal work following the release of her artist monograph “Open Spaces” and has since had two solo exhibitions at American Art Museums and exhibited at over 70 museums and galleries and included in the collections of the Victoria & Albert as well as the Library of Congress. Her work has shown in Los Angeles, New York City, Chicago, Miami, Montreal, Toronto, and London as well as appeared in publications such as The New York Times, Chicago Tribune, LA Times and Juxtapoz Magazine. Bleck has designed five postage stamps for the U.S. Postal Service and three poster images for the U.S. State Department celebrating Earth Day and World Ocean Day. Her work can be found in private and public collections across the United States and abroad.

Cathie Bleck is a past co-founder and president of The Illustration Conference Organization, on the board of The Contemporary Art Society at the Cleveland Museum of Art and a member of The Society of Illustrators, NY and Zygote Press.