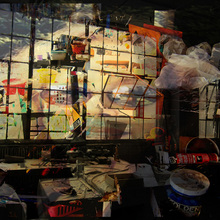 Baila Litton Paintings have been featured in numerous group and solo exhibitions nationally and internationally, including the Riffe Gallery, Columbus, Ohio, The Museum of Art in Huntington, West Virginia, The University Art Gallery, Indiana State University, The McDonough Museum of Art, and The Massillon Museum, The Cleveland State University gallery among others. She had a solo exhibition of her work at The Butler Institute of American Art, and in 2004-2005 had solo exhibitions in Buenos Aires, Argentina, and Dayton, Ohio. Her work was featured in New American Paintings Vol.#23, Studio Visit Magazine, Volume 8, and on the front and back covers of “Out Of Line 2006” an anthology of writings on Peace and Justice and NY Arts magazine, International Edition, Vol.11, No.11/12. Baila Litton is the recipient of The Ohio Arts Council Individual Artist Fellowship in 2000, 2001,2003 in addition to the 2003 presidents Award Grant from Cleveland State University and Independent Pictures Summer Film and Video School She received The Ohio Arts Council Individual Excellence Award for 2006. In 2016 she exhibited in The Art Box project, Switzerland, Miami, Florida, Seattle Convention Center, Seattle, Washington and the New Now 2016 and 2018 sponsored by the Artist Archives of Cleveland, Baila’s work was included in the 2017-2018 Ohio Arts Council Biennial in Columbus, Ohio and in 2019 she exhibited at Worthington Yards Project, Cleveland, Ohio. Her work will be exhibited in the 2019-2020 Ohio Arts Council Biennial in Columbus, Ohio. Baila's work is included in many private and corporate collections. She currently resides in Cleveland Ohio USA