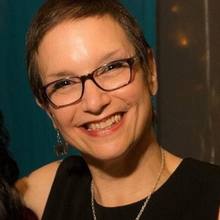 I am a long-time professional in the theatre who has worked locally, regionally, and nationally as an actress, singer, director, designer, puppet-maker, and teacher. While I have had a successful career in theatre and the arts for grown-sups, I became dedicated to creative, intelligent and playful Children's Theatre in my late teens, and have returned to work with children and students frequently throughout my career--focusing on works that incorporate and support inclusion, diversity, and acceptance. My professional work from multiple disciplines has been seen and produced in the Cleveland area at such venues as Cleveland Public Theatre, Cleveland Institute of Music's Opera Stage, Beck Center for the Arts, Dobama Theatre, and Great Lakes Theatre Festival, to name a few, and in most recent years, at Talespinner Children's Theatre, which I founded as a professional company for artists to make theatre arts for children in 2011. No stranger to starting up a new company, I was one of the original members/board of the critically acclaimed Bad Epitaph Theatre Company. Apart from traditional theatre experience, I have also been in the alternative rock-music scene for many decades, fronting and writing for such bands as Queue Up, The Deadward Goreys, and The Rubburheads, to name a few.